Operators are spending millions of dollars just on the license only. It is expected that TDD spectrum will be sold at lower price as compared to FDD spectrum and secondly the TDD spectrum is also available in many countries. So certainly there is emerging interest in TD-LTE. Some of the main advantages of TD-LTE over FDD-LTE are as follows 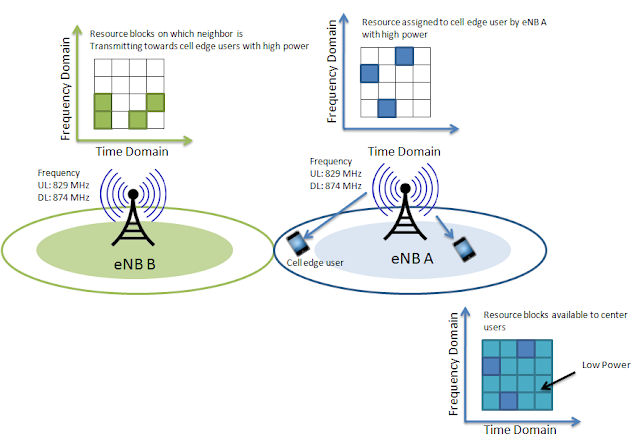 The very first step for UE to gain initial access to the network after completing initial cell synchronization is to read the Master information block (MIB) on BCCH (Logical channel), BCH (Transport channel) and PBCH (Physical channel). Resource elements used by MIB are the first 4 OFDMA symbols of second slot of first subframe of a radio frame. On frequency domain it occupies 72 subcarriers. MIB carries very little but most important information for UE initial access. The content of MIB includes

Why PHICH is carried by MIB?
After decoding MIB, UE has to decode PDCCH to read other system information blocks (SIBs).  PDCCH, PHICH and PCFICH share the resources in the control region of a subframe. So to find the available resources for PDCCH, UE has to know the PHICH configuration only, as PCFICH resources are fixed and known
333 comments:

Every VoIP packet is received / sent every 20ms when the user is talking whereas in silence period, discontinuous transmission (DTX) is used to reduce the transmission rate. Also, in order to sustain voice quality, silent insertion descriptor (SID) packet arrives every 160ms. The frequent arrival/transmission of VoIP packet means large control overhead for lower layers (L1/L2) in the radio protocol stack. To deal with this issue, semi persistent scheduling plays an important role.

In case of semi persistent scheduling, eNB can assign predefined chunk of radio resources for VoIP users with interval of 20ms. Therefore, UE is not required to request resources each TTI, saving control plan overhead. This scheduling is semi-persistent in the sense that eNB can change the resource allocation type or location if required for link adaptation or other factors.
29 comments:

Cell synchronization is the very first step when UE wants to camp on any cell. From this, UE acquires physical cell id (PCI), time slot and frame synchronization, which will enable UE to read system information blocks from a particular network.

UE will tune it radio turn by turning to different frequency channels depending upon which bands it is
supporting. Assuming that it is currently tuned to a specific band / channel, UE first finds the primary
synchronization signal (PSS) which is located in the last OFDM symbol of first time slot of the first subframe (subframe 0) of radio frame as shown in figure (green squares). This enables UE to be synchronized on subframe level. The PSS is repeated in subframe 5 which means UE is synchronized on 5ms basis since each subframe is 1ms. From PSS, UE is also able to obtain physical layer identity (0 to 2).

In the next step UE finds the secondary synchronization signal (SSS). SSS symbols are also located in the same subframe of PSS but in the symbol before PSS as shown in the figure(yellow squares). From SSS, UE is able to obtain physical layer cell identity group number (0 to 167).

For VoIP packets, the size of headers (IP/UDP/RTP) is usually larger than the data itself. Compressing these protocol headers over end to end (User to user) connection is not feasible since the headers play important role, but there is possibility to compress them over the air interface i.e. between UE and eNB/NB/BTS etc. Over the air interface, protocol headers do not play any role, so therefore there is considerable reduction in the data over head on radio interface. For IPv4, UDP and RTP, the amount of overhead due to headers is 40 bytes while RoHC can compress this to 2 or 3 bytes. RoHC is described in RFC 3095 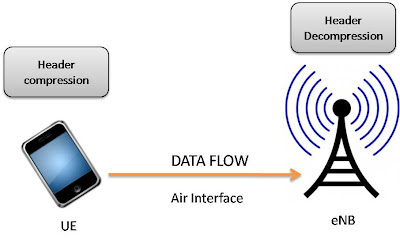 In LTE, the role of Packet data convergence protocol layer (PDCP) is to implement RoHC as shown below (Only uplink traffic shown).
RoHC is applied to user plane traffic only while this feature is transparent to control plane traffic.

Use of RoHC with conversational bearer (QCI 1) in LTE will result in efficient use of radio resources since it can reduce the user plane traffic by several bytes over air interface.