We know that 2G and 3G terminal uses discontinuous reception in idle mode. In LTE the tradition has continued and we have similar DRX in idle mode but in addition to that we also have DRX in RRC mode.  In LTE, when there is no data to receive or transmit in RRC connected mode, UE would switch off its transceiver for a very short interval. It will start similar "wake up and sleep " cycle. During the wake up period, it will keep monitoring PDCCH channel for UL or DL grants whereas the sleep periods will improve the battery savings 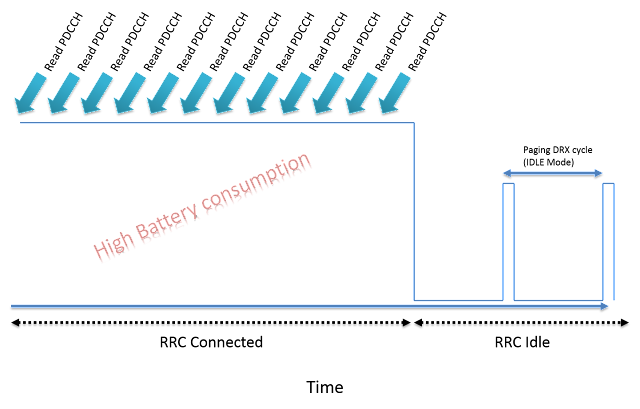 With DRX enabled in connected mode, UE only monitors PDCCH channel when it is awake during the sleep/wakeup cycles as seen below. During the sleep time, UE doesn't monitor PDCCH channels which results in energy savings. All the DL grants are delayed to nearest wake up period 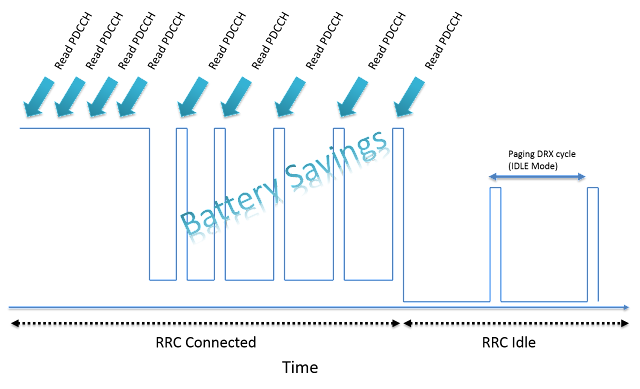 Some of the important parameters used in configuring the DRX for UE are shown below. The parameters are transferred to UE through RRC reconfiguration message 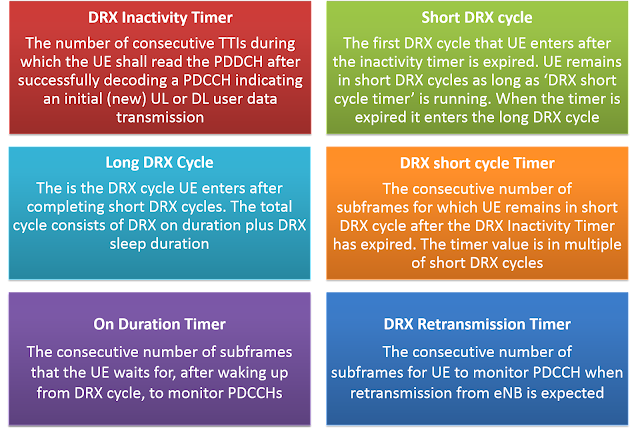 To better understand these parameters, see the below picture which shows each parameter 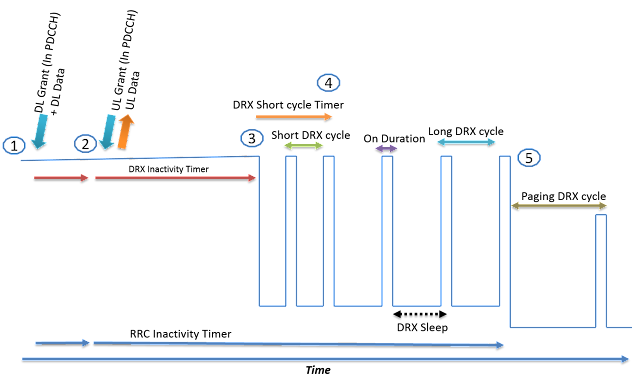 In the above basic scenario it may seem complicated to include HARQ retransmission's scenarios, so here is another example below 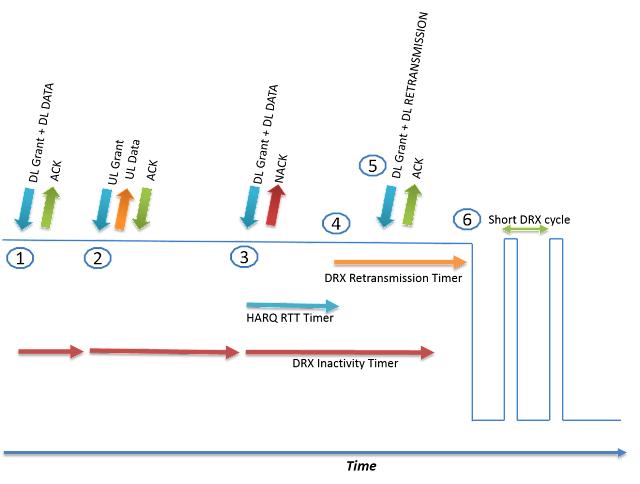 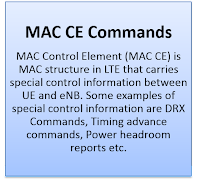 LTE-U also poses major challenges to WiFi as both will operate in an unlicensed and un-controlled spectrum. However, various techniques have been developed to share the unlicensed spectrum fairly between LTE and WiFi technologies. Please check below white paper from Nokia for more details on LTE-U

In LTE network, UEs need to measure signal strength of its own and neighbor cells constantly, during idle, connected mode or handovers in order to keep the signal quality constant. UE measures RSRP and RSRQ in LTE 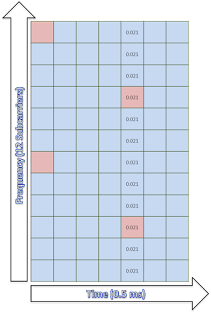 Lets try to calculate RSRP, RSSI and RSRQ for one very simple case of one resource block with 12 sub carriers and 0.5 ms in time domain. For sake of simplicity, lets assume the power of reference symbols  (shown by red square) and power of other symbols carrying other data channels (shown by blue square) is same i.e. 0.021 watt

Why do we use dBm as a unit of Power

We use decibels-milliwatts to measures power levels in telecommunication and other fields instead of Watt. The reason to use logarithmic scale is that it helps in reducing massive values to smaller number

dB is ratio between two power values while dBm is used to express an absolute value of power. So when we mention RSRP and RSSI we shall always use dBm since we are talking about absolute power values but we need to use dB with RSRQ since it is the ratio of RSRP to RSSI

It was 3GPP release 8 when LTE was introduced for the very first time.  All the releases following only enhanced the technology.

Based on release 8 standardization, following were the main achievements

The initial enhancements were included to LTE in release 9. These were in fact the improvements which were left behind from release 8 or perhaps provided some minor improvements. These improvements are listed below with brief description

Femto Cell: Femto cell is basically a small cell used in offices or homes and connected to providers’ networks through landline broadband connection. 3G Femto cells are deployed around world and in order for LTE users to take advantage of femto cell, new requirements were added to release 9

Self Organizing Networks (SON): SON means self installation, optimization and healing of networks in order to reduce manual work and cost associated with technical support. The idea of SON was introduced in release 8 though the focus was more towards eNBs self configuration where as in release 9, requirements for self optimization were also added

eMBMS: With  Multimedia broadcast Multicast Services (MBMS), operators have capability to broadcast services over LTE network. The idea is not novel to the LTE and  has been used in legacy networks as well but for LTE, the MBMS channel has evolved from data rate and capacity perspective. The MBMS was already defined at physical layer in release8 but with release 9, higher layer and network layer aspects were completed

LTE Positioning: Three position methods are specified in LTE release 9 i.e. Assisted GPS (A-GPS), Observed Time difference of arrival (OTDOA) and Enhanced Cell ID (E-CID). The goal is to improve the accuracy of user locations in case of emergency scenarios where the user itself is unable to disclose his whereabouts

Following are some significant improvements in release 10

MIMO enhancements: LTE-Advanced allows upto 8x8 MIMO in downlink and on the UE side it allows 4X4 in uplink direction

Carrier Aggregation (CA): CA introduced in release 10 is a cost effective way for operators to utilize their fragmented spectrum spread across different or same bands in order to improve end user throughput as required by IMT-Advanced. User throughput is increased by sending data simultaneously over two or more carriers. LTE-Advanced supports bandwidths up to 100 MHz formed by combining up to five 20MHz component carriers. Contiguous and non-contiguous carriers may be aggregated

Release 11 includes enhancements to LTE Advanced features standardized in release 10. Some of the important enhancements are listed below

Coordinated multipoint transmission and reception (CoMP): With CoMP the transmitter can share data load even if they are not collocated. Though they are connected by high speed fiber link

Network based Positioning: In release 11, support for uplink positioning is added by utilizing Sounding reference signals for time difference measurements taken by many eNBs.

Minimization of drive test (MDT): Drive tests are always expensive. To decrease dependency on drive tests, new solutions introduced which are independent of SON though much related. MDT basically relies on information provided by UE

Ran overload control for Machine type communication: For machine type devices new mechanism has been specified in release 11 where network in case of mass communication from devices can bar some devices to send connection request to network

Smartphone Battery saving technique: Many applications on smartphones generate background traffic which consumes battery power. Release 11 specifies a method where UE can inform network whether it needs to be operated in battery saving mode or normal mode and based on UE request network can modify DRX parameters

Small cells enhancements: Small cells were supported since beginning with features like ICIC and eICIC in release 10. Release 12 introduces optimization and enhancements for small cells including deployments in dense areas. Dual connectivity i.e. inter-site carrier aggregation between macro and small cells is also a focus area

Ongoing - Release expected to be frozen in  Dec 2015

enhancements for Machine-Type communication (MTC): Continuing from release 12, there are further enhancements in MTC, a new low complexity UE category is being defined to provide support for reduced bandwidth, power and support long battery life.

MIMO enhancements: Upto 8 antenna MIMO systems are currently supported, the new study in this release will look into high-order MIMO systems with up to 64 antenna ports
19 comments: 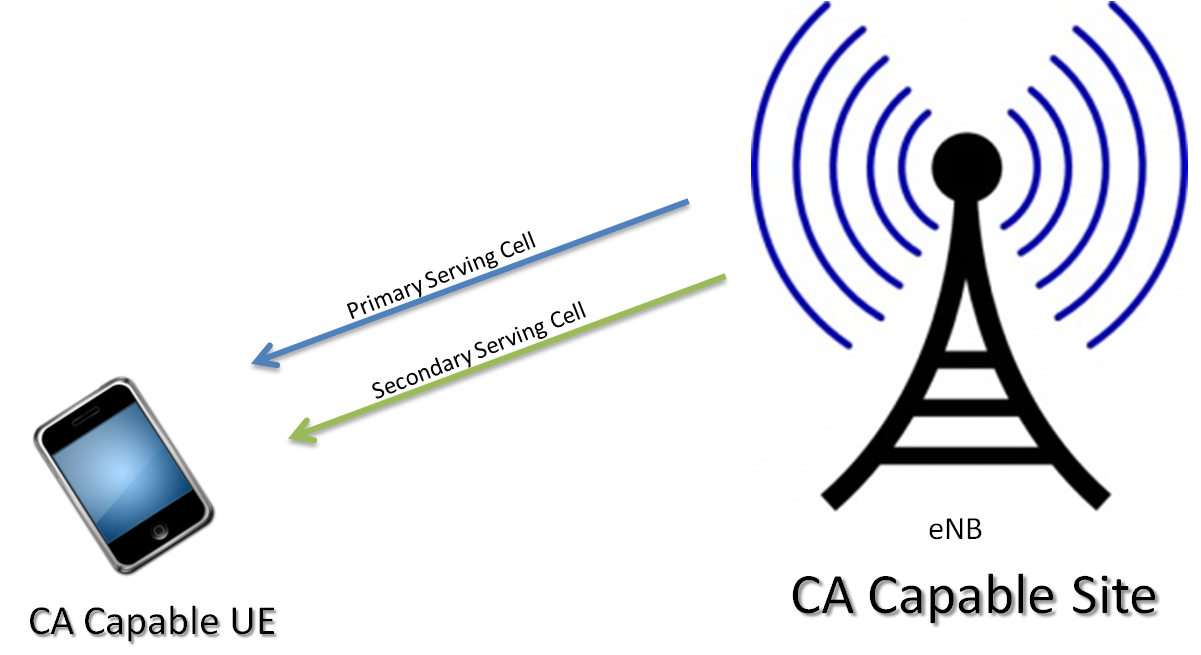 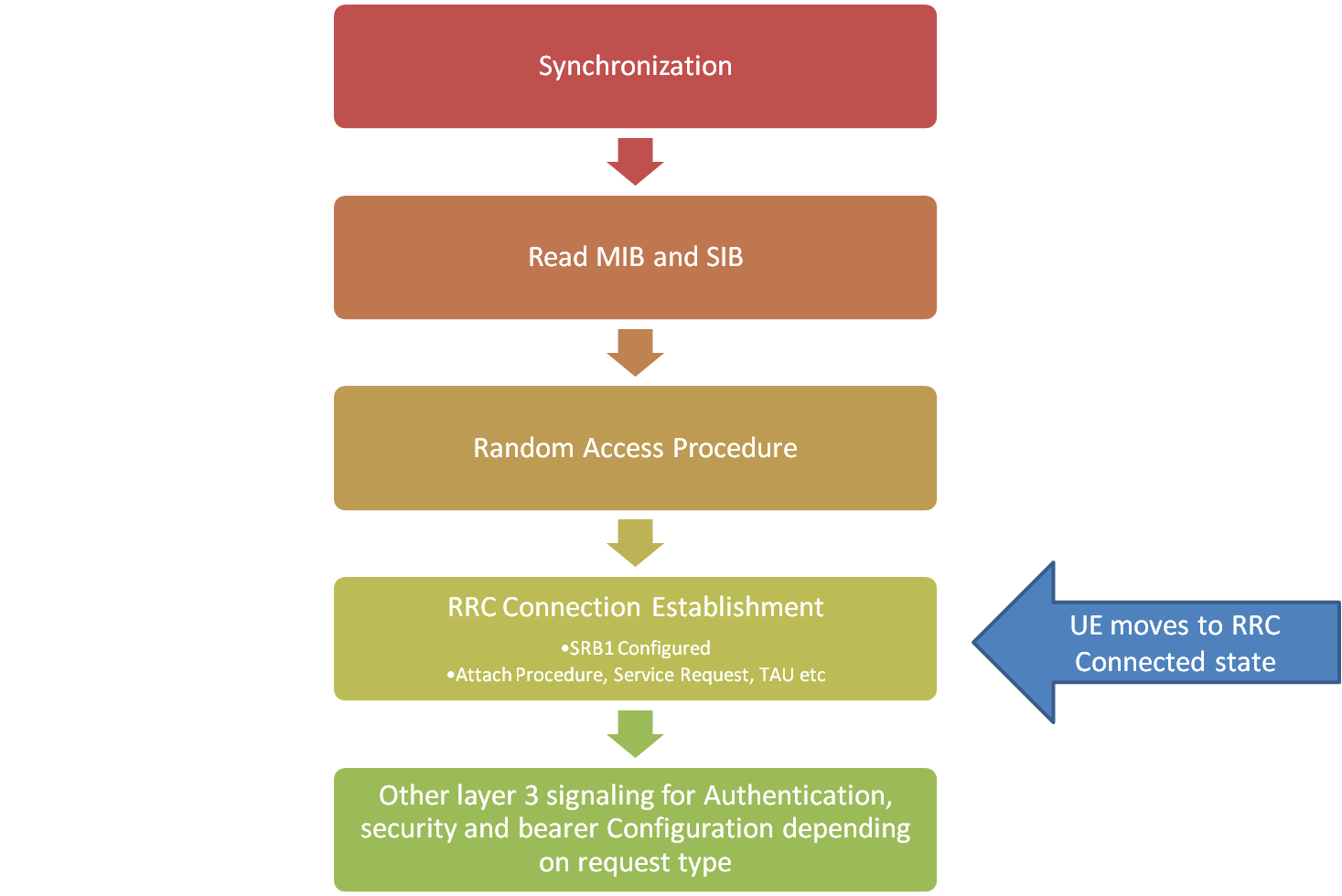 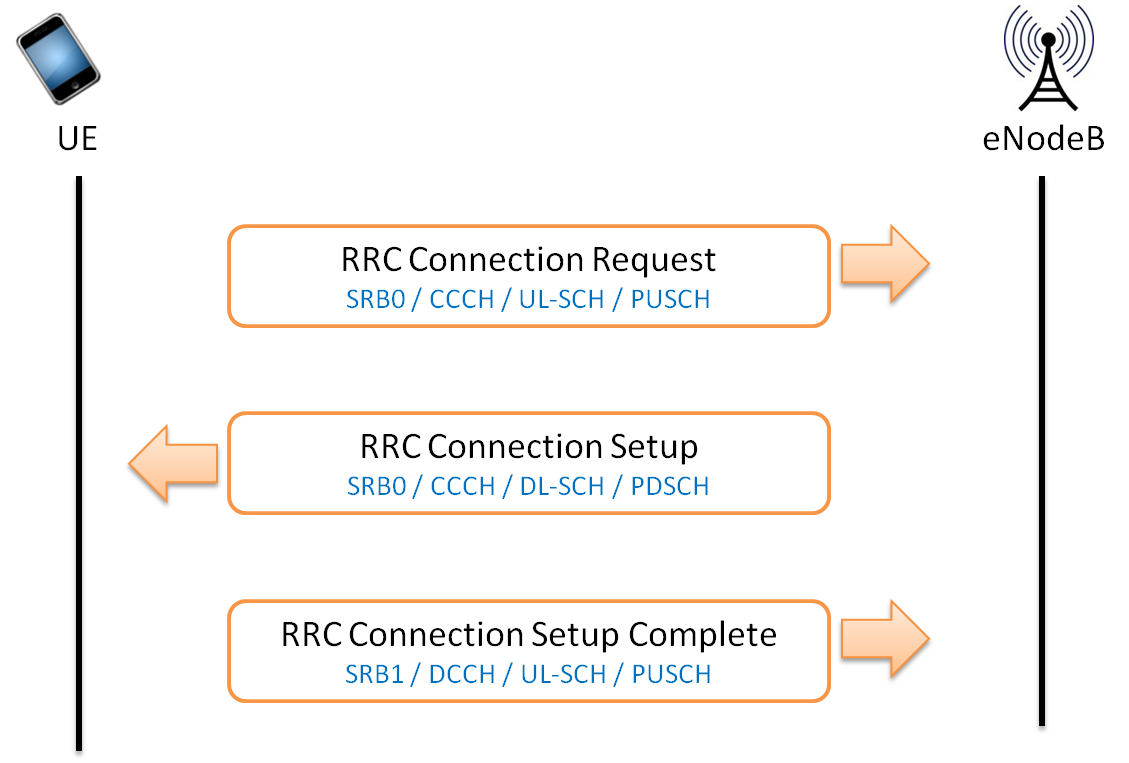 Actually the RACH Msg3 is the first message of RRC connection establishment procedure. Once the UE has obtained temporary resources via MSG2 in RACH process , its now ready to send 'RRC connection request' message using UL-SCH to eNodeB. UE is identified by temporary C-RNTI assigned in RACH Msg2

The RRC connection setup message contain configuration details for SRB1 so that later messages can  be transferred via SRB1. Remember the SRB2 is always configured after the security activation.

Example message is shown below